Security is more that just https – signon.se just missed me as a customer

While at the hotel, I installed the Android app “Renfe Ticket” and bought my ticket. It worked all perfectly. 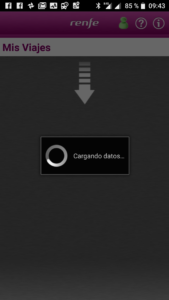 But when I later needed to show this ticket in order to get on the train, the app complained that I had no connection to the internet. (However, everything else on the internet was working perfectly well: I could open various webpages, communicate via WhatsApp and post images to Facebook…)

In order not to miss the train, I had to go and by a second ticket from the cashier and then rush back to board the train.

(I was instructed to file a complain and request a refund. I did that on the very same day. Now it’s been more than a week, so Renfe isn’t really hurry with correcting things, but that’s another story.)

I then experimented a bit. And here’s what I found out.
Obviously, the app is communicating via some kind of API with RENFE’s servers. And these servers simply discard requests from foreign IP-addresses! So when I’m using the mobile internet from my Swedish mobile number, their servers can’t be reached. (When you’re connected to the WiFi in the hotel all is perfectly fine, since you’re then using the internet connection of the hotel.)

Same problem happens when I try to check expected arrival time for the commuter train: the app Renfe Cercanias isn’t able to give me any information while I’m using my Swedish mobile internet connection.

So: When European Union strives to unite its member states into one large country (telecom-wise), RENFE is going in opposite direction, making sure that ONLY Spanish mobile numbers should be served in their apps.