Create your first WP plugin to start using Google analytics, while excluding yourself from tracking

Recently, the main activities of the Festival of Words in the small Swedish city Östhammar occured. A part of the festival was the “Poetry Street”, where quite a few short poems on the festivals theme (for the year 2014, the topic is freedom) were on display in the windows of various shops in the centre of the city.

Two of my own texts are included, but since I live too far away from Östhammar to see those displays myself, I suggested that we should back up with virtual version of the Poetry street. This way, anyone can visit the exhibition, without going to Östhammar. And the exhibition will still be around when the poems are taken down in the shops physical display windows. And, finally, the internet version can be useful even to someone visiting Östhammar, since s/he has the possibility to check that no single poem on display was missed!

First, I'll give a quick look at what the map looks like. It’s interactive. Try clicking on some of the placemarks, to see the included poetry!

If you want to open the map in a separate window, then you can follow the following link: https://www.google.com/maps/d/u/0/viewer?mid=zwgg-cowSScs.kvTh5A-A3Kl0&hl=en

And now I want to give you the recipe, for how to create this map. Not all steps were too obvious.

Write a comment here if this article was useful. Would be nice to know what kind of projects you come up with.

In case the iframe didn’t work out above, here’s a small screen shot: 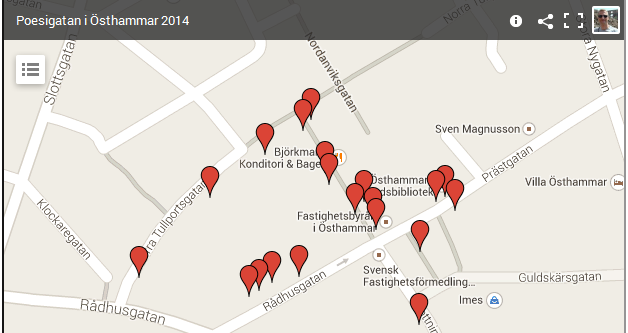